skip to main | skip to sidebar

Temples and shrines in Japan

Labels: travel
E and I were so excited to go temple hopping in Japan, for some reason neither of us ever got tired of exploring temple after temple. Plus, both Buddhism and Shintoism were fascinating to learn about. Traditionally Shintos have shrines and Buddhists have temples, however both religions have been active in Japan for so long, lots of temples will have a Shinto area, and visa versa.

The first temple we went to is called Senso-ji in Tokyo. E had been to this temple on his previous trip and just loved it. This temple was laid out in the traditional Buddhist sense, the two main gates, the pagoda to the left, the incense burner, the main buildings and multiple sub temples. When seeing Senso-ji for the first time I didn't realize I would come to know this layout quite well. E and I spent a great deal of time at Senso-ji and took a great deal of photos, here are two favorites: 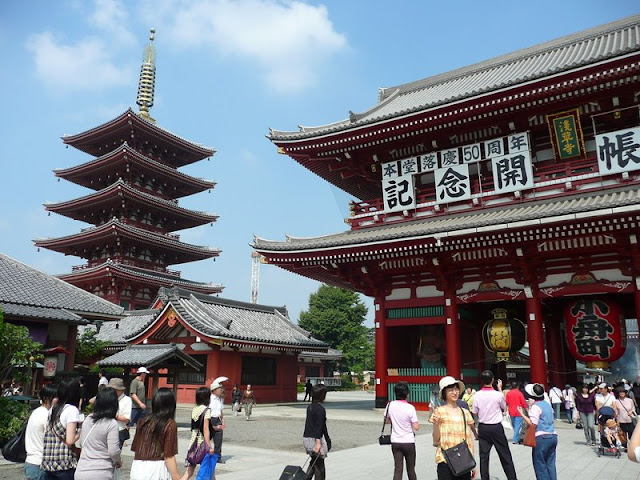 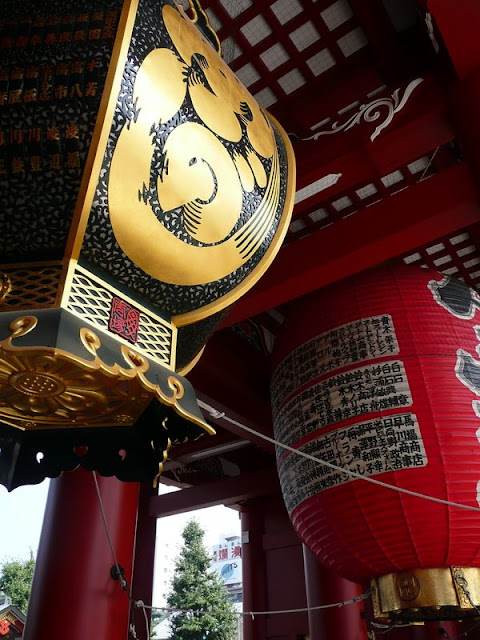 The next temples we visited were away from Tokyo altogether. Instead, we took a bullet train to the mountains and visited Nikko, an stunning area in the woods where the brightly colored temples have been standing for hundreds of years. To access the mountainous area you have to cross over the Daiya River. One way to cross it is to take the Shinkyo Bridge, which is a site to itself.

Here is the stunning Shinkyo Bridge (isn't the color of the water unreal?) 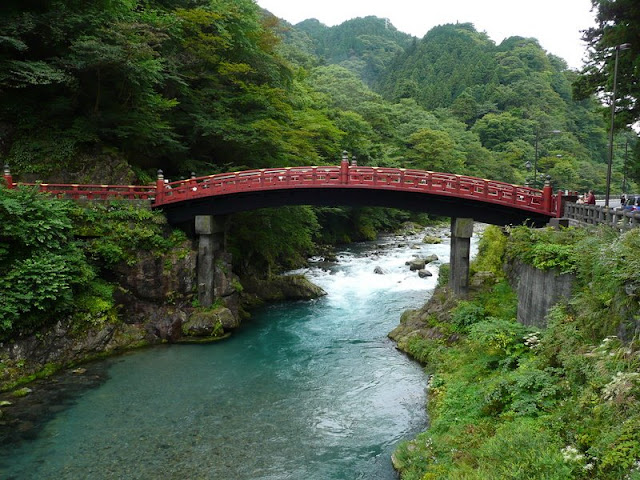 Once you arrive in the mountains you are surrounded by an entire complex of beautifully painted temples. 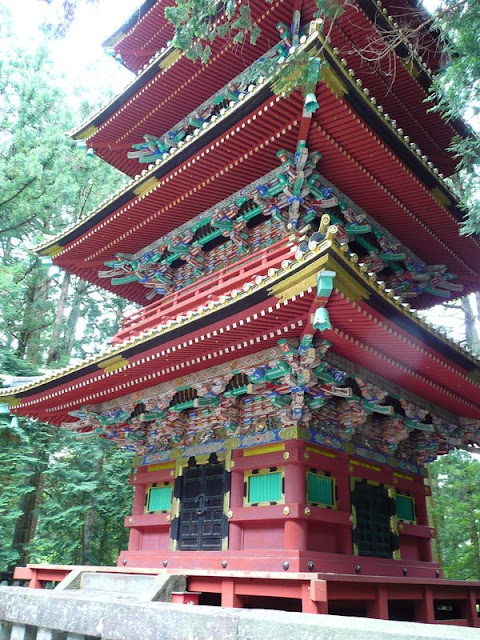 Many temples and shrines have areas where you can hang a prayer, and the monks will pray that all the prayers get answered. These prayers are written on little wooden planks and hung one after another. 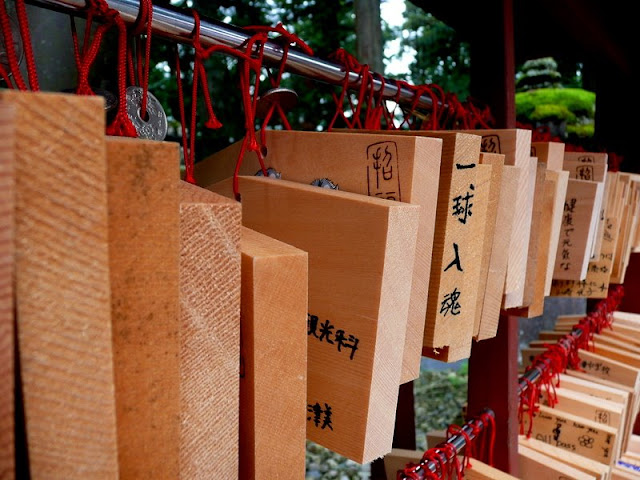 Toshogu in Nikko had this building that was the library. Inside were the teachings of Buddha. Isn't the setting glorious? 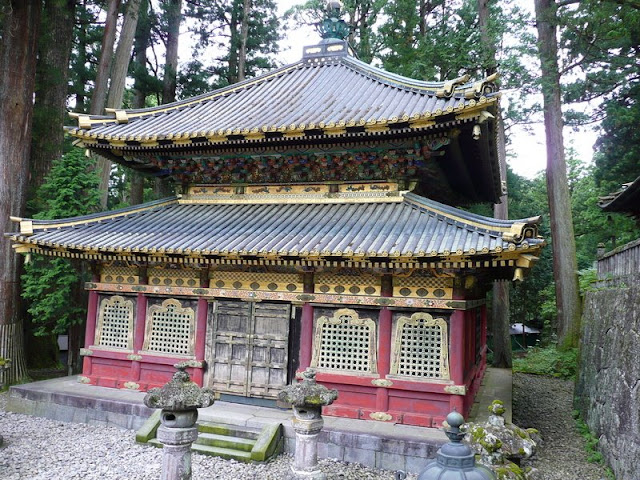 The next temples we visited were in Kyoto Japan. We left Tokyo, caught another bullet train and were in Kyoto by lunch time. Kyoto has hundreds of temples and shrines, you can even stumble on them without realizing.The first day we were there E and I found three just by wandering the streets. These are small temples, but still beautiful. 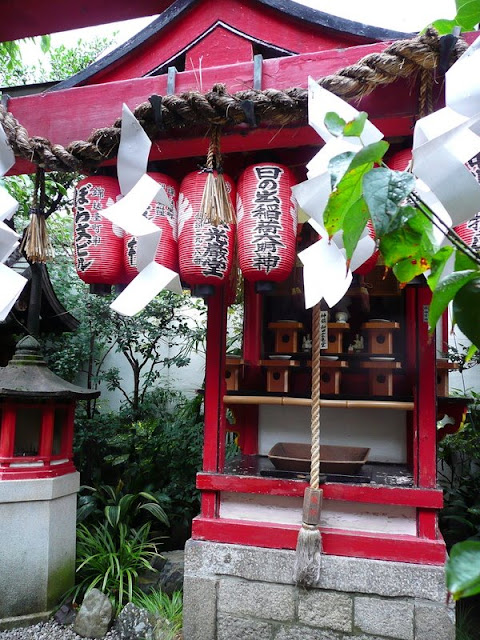 All the lanterns come on as dusk arrives. 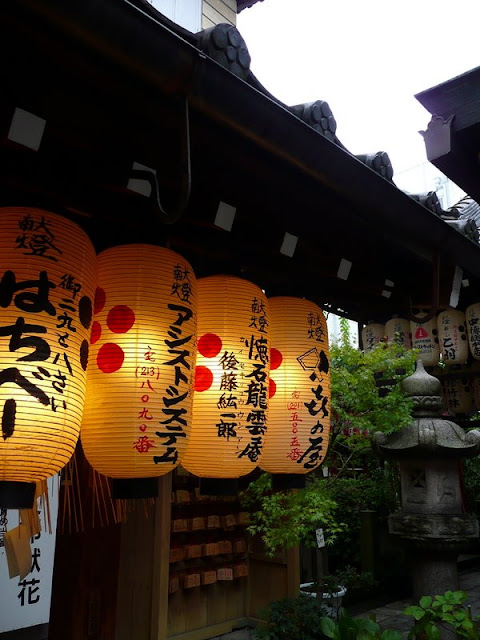 Also Kyoto has lots of large temples and shrines to offer. One of the ones I was most excited about was Fushimi-Inari Taisha Shrine in the Eastern hills of Kyoto. This shrine is very famous for its hundreds of orange tori gates leading up the mountain. E and I both loved it, wow wow wow. 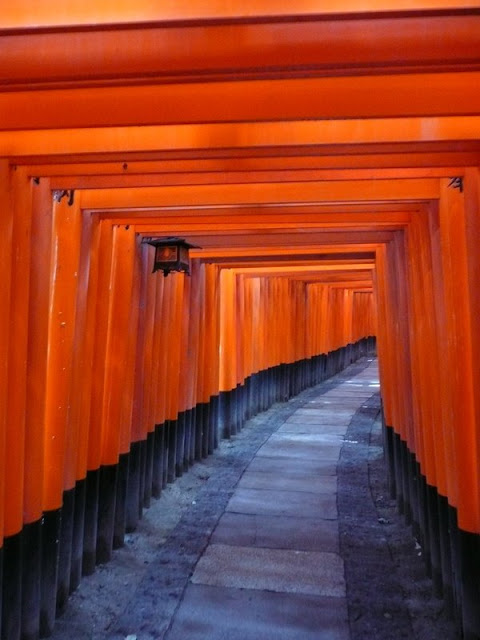 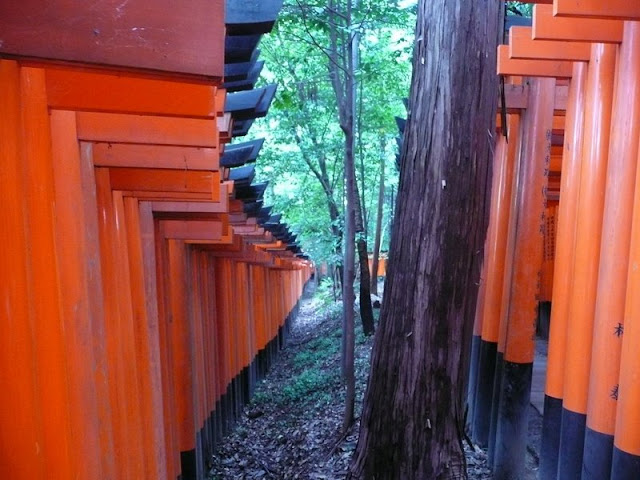 Plus, this shrine was build for the rice gods, represented as a fox. 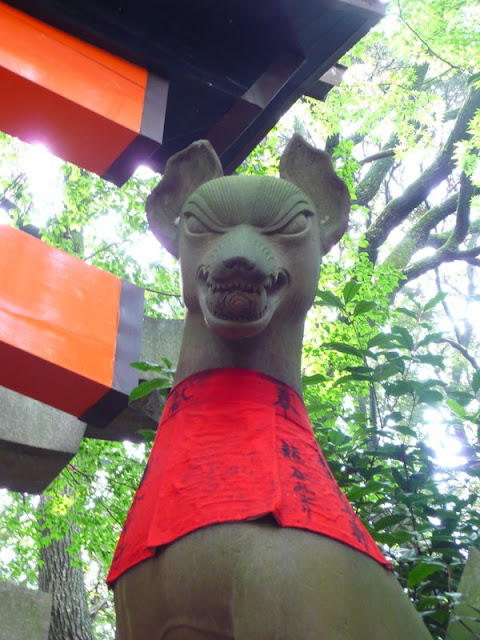 The next temples and shrines on our agenda were Kiyomizu Temple and Yasaka Shrine. Both have been in their current locations for over a thousand years. The current wooden structure that stands here was built without nails in 1633. 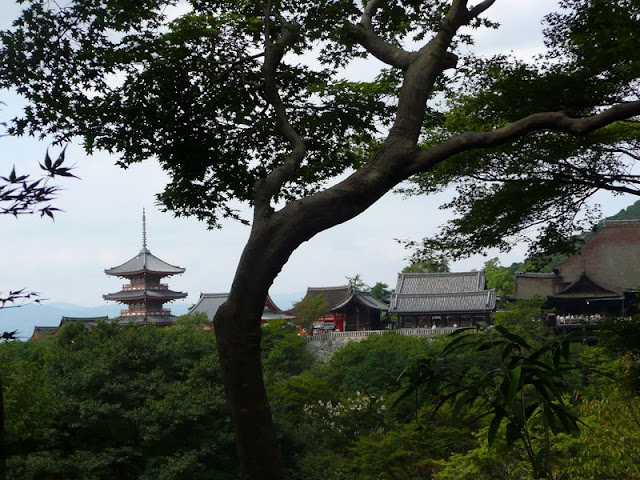 Here is one of the sub-temples that stands near Kiyomizu. 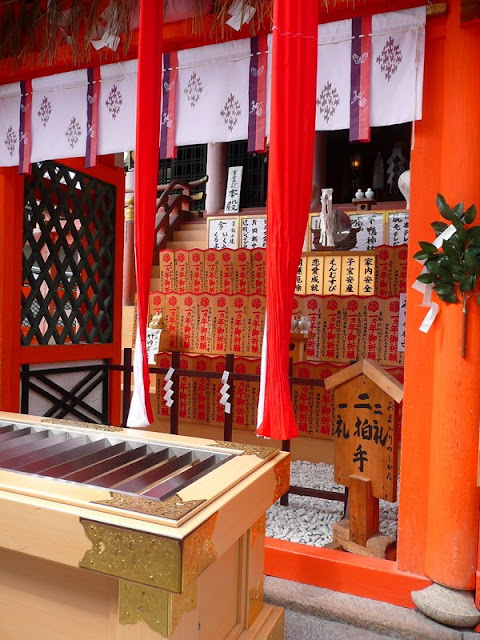 Down the hill from Kiyomizu-dera Temple is Yasaka Shrine. Isn't it awesome? And this is just the front gate. (And, for any of you that have read Memoirs of a Geisha, this is where Chiyo goes to donate the remaining money after the Chairman gives her a coin to buy shaved ice). 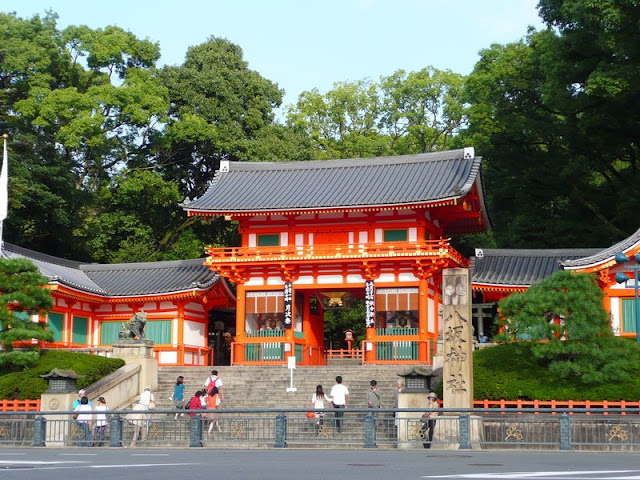 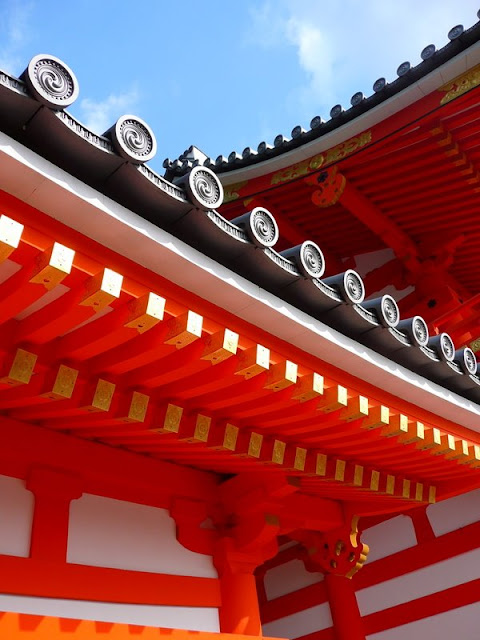 E and I also visited a few Zen Temples. Zen Temples have a different feeling to them altogether. The purpose of a Zen Temple is meditation, so many of the rooms and halls are more simple than other Buddhist Temples. Often in Zen Temples there are courtyard gardens, and dry gardens to help the monks focus and therefore meditate.

E and I went to two Zen Temples, the first was Kennin-ji Temple in Gion Kyoto. This one we loved, it was so stunning and all the meditation rooms were open to sit in and meditate, if you wanted to. The courtyard gardens were really something. 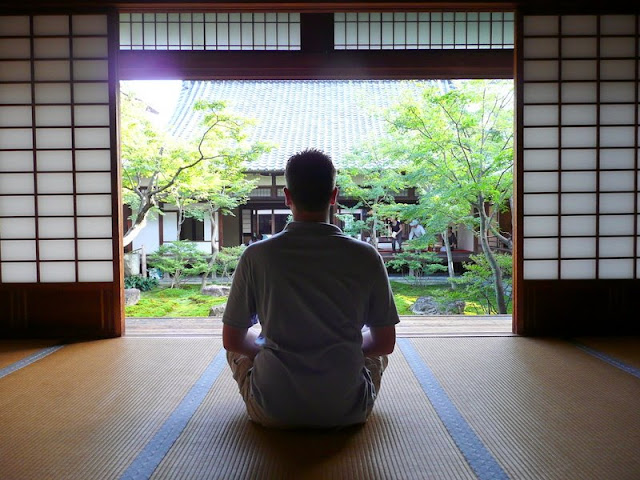 Here is one of the courtyard gardens. 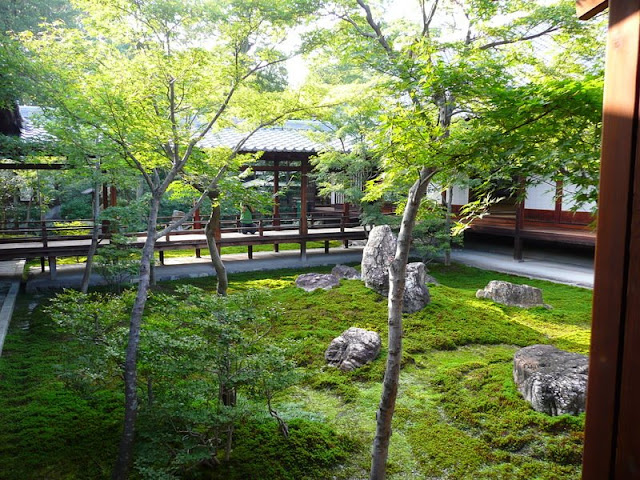 And another. The dry gardens are raked gravel mean to symbolize different things, this one was raked to symbolize the ocean. 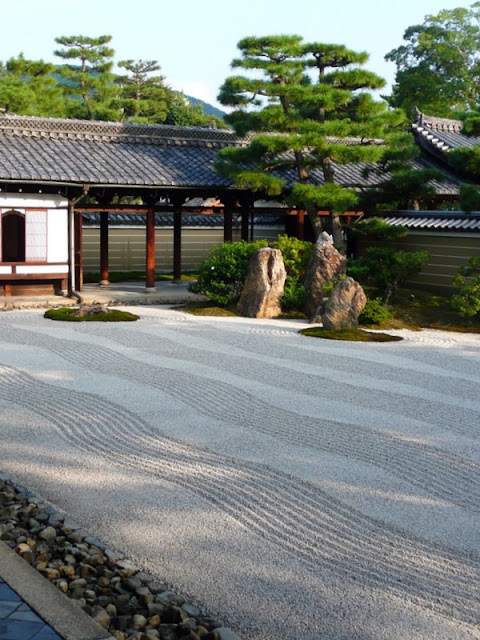 The last temple we saw before leaving Kyoto was Nazen-ji Temple, another Buddhist Zen Temples. This temple complex was one of the largest we'd seen with 6 main buildings and they once had 49 sub-temples!

View over the temple complex in Kyoto. 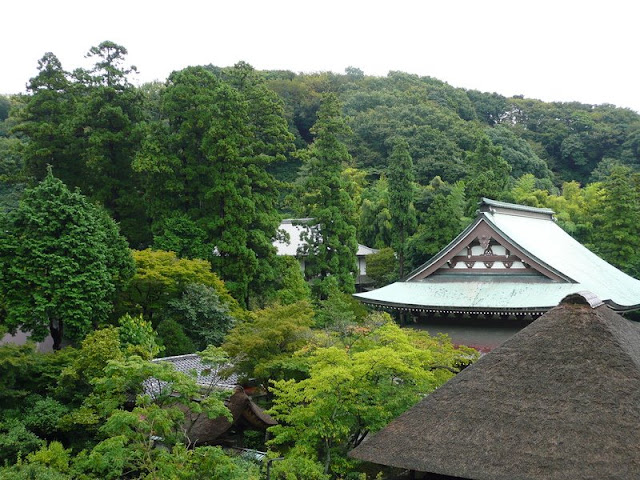 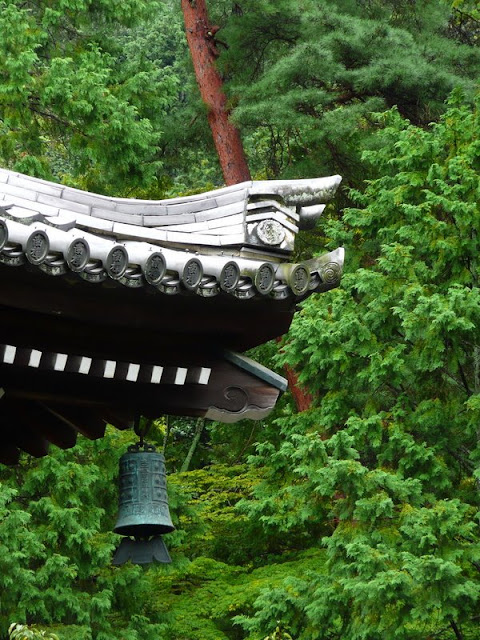 Another dry garden. We only saw dry gardens at Zen Temples, and really liked them. 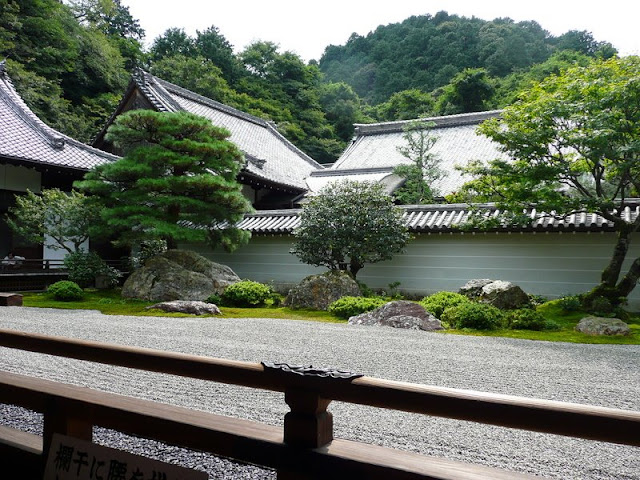 Finally it was our last temple day, and E and I went to Kamakura, which is a seaside town not far from Tokyo full of Temples! We only saw four out of the dozens to see, but we loved each of them.
At the Enkaku-ji Temple there were hundreds of little carved Buddhas all lined up. We thought each was so beautiful and unique, no two were the same. In Japan, Buddha is not seen as the fat grinning man we see here in the states, instead, he is quite thin and is usually shown with his eyes closed in meditation. 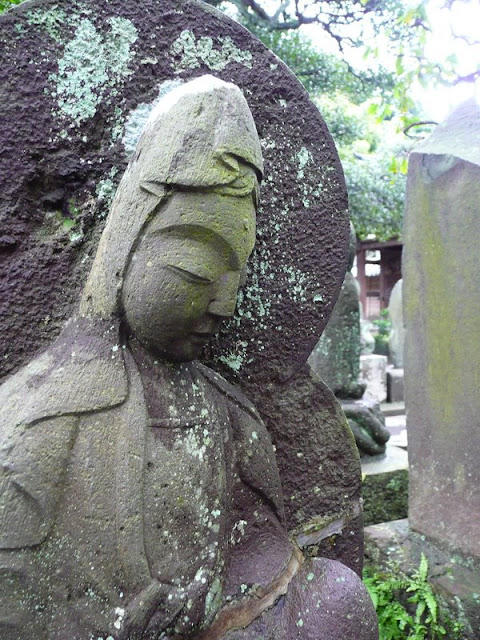 Another neat thing about Enkaku-ji Temple was the fact that it was built up against a small cliff. This meat that some of the shrines and meditation rooms were actually build into the cliff! 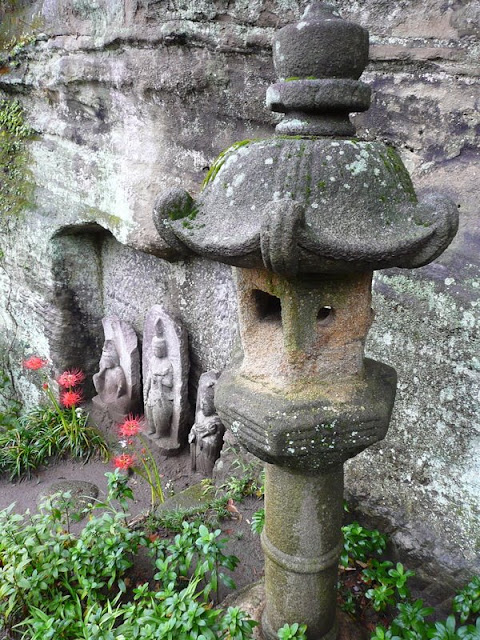 Behind the Tokei-ji Temple in Kamakura there was a cemetery that led up the hill. Never in my life had I seen so much green. It was magical. 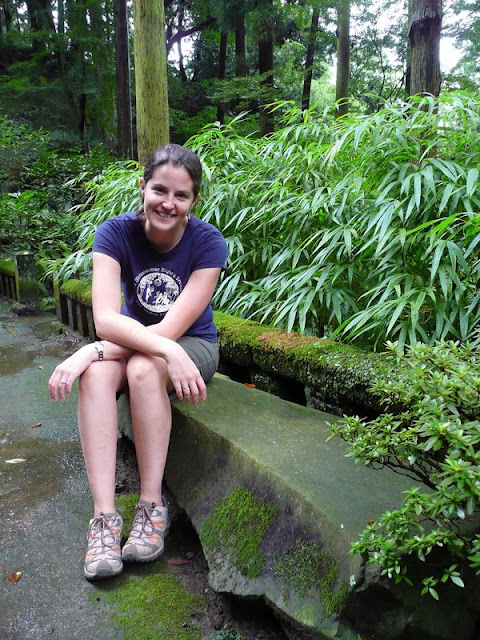 I think this photo of the two of us was taken at Enkaku-ji Temple, but is hard to remember, we visited so many! 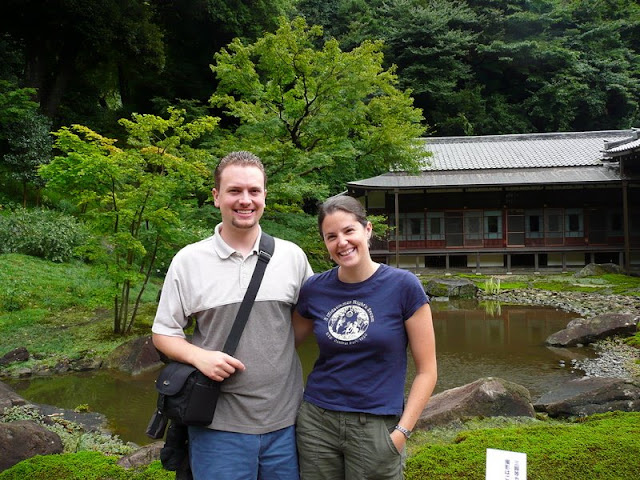 Here is one of the main buildings of Kencho-ji, our last temple in Kamakura and my last temple of the trip. 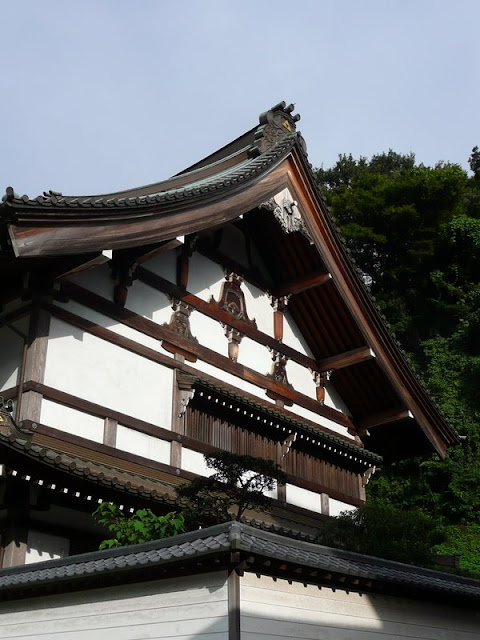 It is so peaceful here. 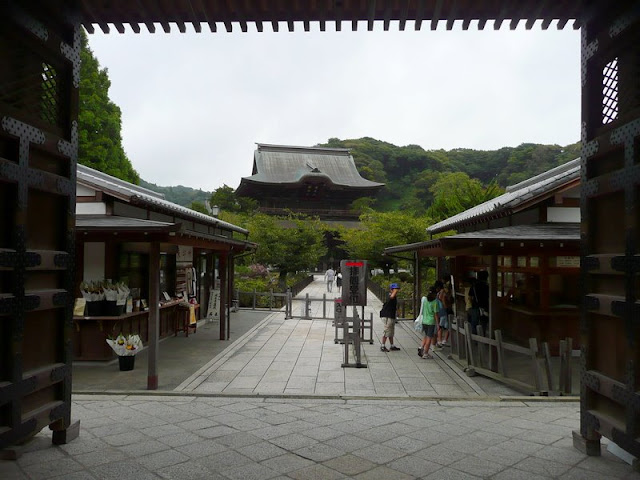 I hope you enjoyed the temple hopping half as much as E and I did. More Japan posts to come!
at 8:38 PM

Blogs I can't seem to get enough of: